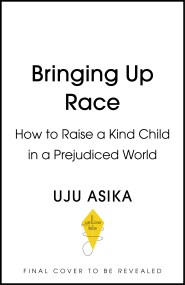 You can't avoid it, because it's everywhere. In the looks my kids get in certain spaces, the manner in which some people speak to them,…