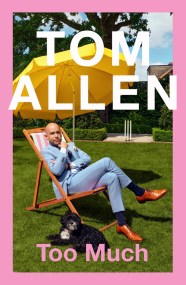 'Tom Allen is one of the funniest comedians in the UK, the best-dressed man I know, and now it turns out he is a superb…