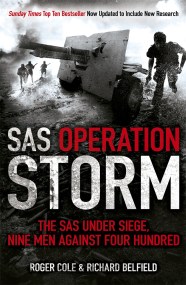 OPERATION STORM is the inside story - told by those who took part - of the greatest secret war in SAS history. The tipping point,…