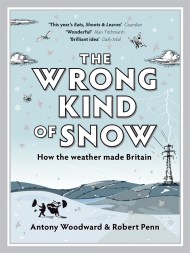 The Wrong Kind of Snow

It is a fact universally acknowledged that the British are obsessed with the weather. This is not surprising as no country in the world has…