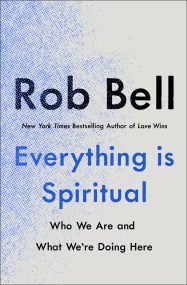 In Everything is Spiritual, the author Rob Bell explores how ideas about creation, love and connection shaped him and how they shape every one of…