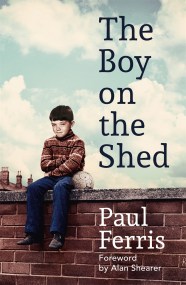 The Boy on the Shed:A remarkable sporting memoir with a foreword by Alan Shearer