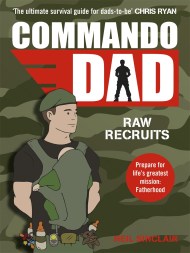 Written by ex-Commando and dad of three Neil Sinclair, this no-nonsense manual is a must-have for every man about to embark on his greatest mission:…