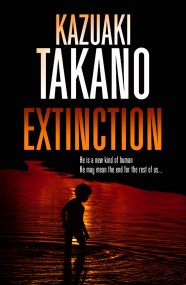 He is a new kind of human He may mean the end for the rest of us... One bright morning in Washington D.C., the US…