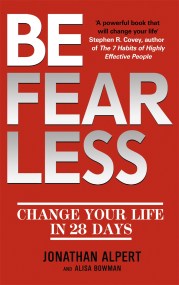 Psychotherapist Jonathan Alpert wants readers to know one thing: you can face your fear and create your ultimate life - and you can do it…