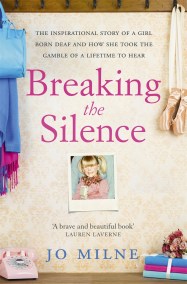 Imagine for a moment that you have never heard the voices of those you love, the music on the radio, the sound of birdsong at…