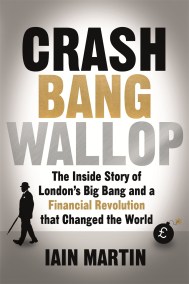 The one book you need to read if you want to understand the financial world. For fans of Michael Lewis's THE BIG SHORT and Andrew…