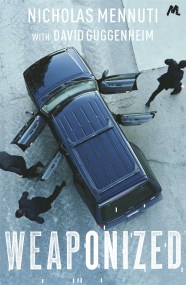 Kyle West is a wanted man. The United States government think he's leaked secrets at the highest level, and they'll stop at nothing to find…