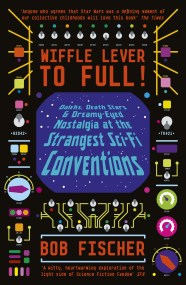 'Personal and engaging . . . anyone who agrees that Star Wars was a defining moment of our collective childhood will love this book' -…