A HOUSE FULL OF DEADLY SECRETS. A MOTHER WHO'LL RISK EVERYTHING TO BRING THEM TO LIGHT. 'This tense and beautifully written thriller gripped me from… 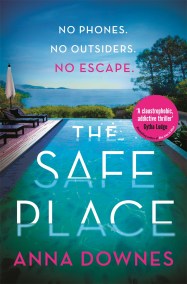 NO PHONES NO OUTSIDERS NO ESCAPE 'An exciting and compelling new voice, Anna Downes' The Safe Place is a very accomplished debut' B.A. Paris, Sunday…