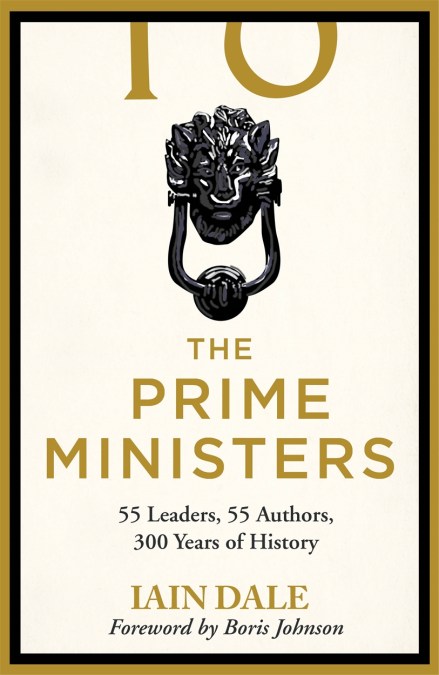 A Times Political Book of the Year

‘An entertaining, thorough and informative canter through the characters and stories of prime ministers past.’ – New Statesman

‘A wealth of enjoyable insights into three centuries of Westminster politics… It is a most elegant hardback volume, with a gilded cover that looks a little like the famous front door of No. 10 itself; the ideal Christmas gift.’ – Joyce McMillan, The Scotsman

‘This is a timely study of UK Prime Ministers and Iain Dale has done the subject a great service with this measured and thoughtful labour of love which offers a fascinating set of insights into the history of Britain, politics, the role of Prime Minister, and elite and establishment power… a superb guide to the times we have lived through and are living in.’ – Gerry Hassan, Scottish Review

‘Many of my predecessors were giants, some had feet of clay, all possessed human foibles.’ – From the foreword by Boris Johnson

It has almost been 300 years since Sir Robert Walpole arguably became the first holder of the office of Prime Minister in 1721 – an office which today is under scrutiny like never before. The Prime Ministers, edited by leading political commentator Iain Dale, brings to life all 55 of Britain’s ‘First Among Equals’ with an essay for each office holder, written by key figures in British politics. From the obscure 18th-century figures like the Earl of Shelburne to 20th-century titans like Churchill and Thatcher, this book provides a much-needed reminder about their motivations, failures and achievements. 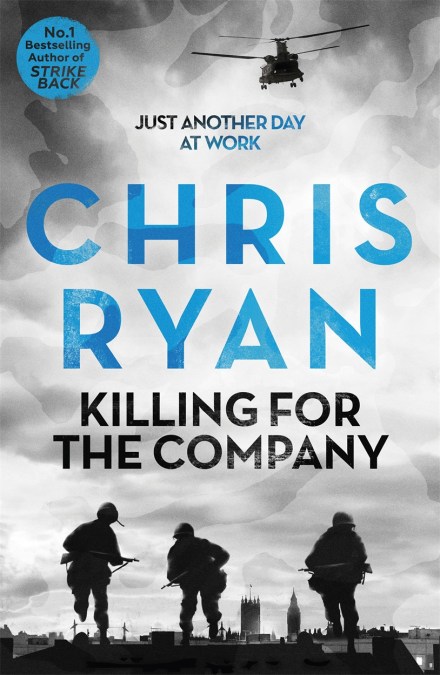 Killing for the Company

by Chris Ryan
From the author of the bestselling Danny Black series and hit TV show Strikeback.

Former SAS legend Chris Ryan brings you his sixteenth novel and it is full of all his trademark action, thrills and inside knowledge.

2003. Invalided out of the SAS Chet Freeman makes his living in high-end security, on a temporary contract for an American corporation called the Grosvenor Group. He catches a young woman, a peace campaigner, eavesdropping on a meeting the Group is holding with the British Prime Minister. The Group’s interests include arms manufacture, and what Chet and the young woman overhear seems to imply that it is bribing the Prime Minister to take his country into an illegal war.

Could this possibly be true?

Somebody believes that this is a secret that needs covering up, because Chet and the girl are attacked. Hunted down, they go into hiding, and a deadly game of cat and mouse begins.Nearly ten years later tension is reaching breaking point in Jerusalem. The now ex-Prime Minister is working as a Middle East peace envoy. As the city descends into anarchy and rival armies are poised to turn it into a battlefield, Chet’s best buddy, Luke, is part of a team tasked by the Regiment with extracting the ex-Prime Minister.

At the height of the battle Luke discovers a conspiracy far more devastating than any arms deal. 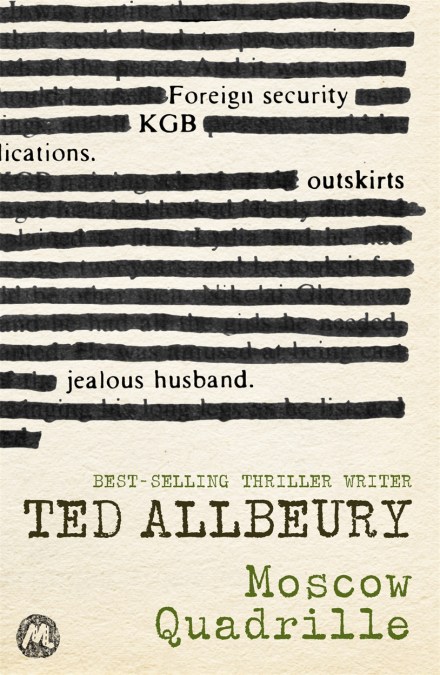 by Ted Allbeury
A Russian actor on the KGB payroll…

A middle aged wife with a fatal sense of guilt…

Their shadowy dance has begun to a tune of betrayal, disillusionment
and death, and a nation’s fate hangs in the balance. 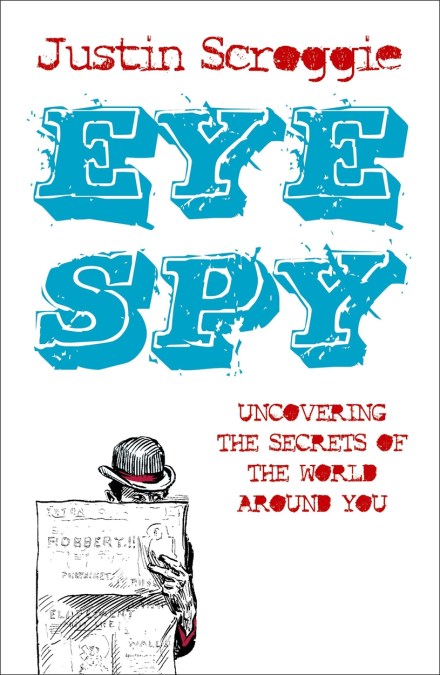 by Justin Scroggie
DID YOU KNOW?

There are 3 Freemason secret handshakes

Every Victoria Cross is made from bronze Chinese cannon

The MI5 codename for the Prime Minister’s cat is ‘Pegasus’ 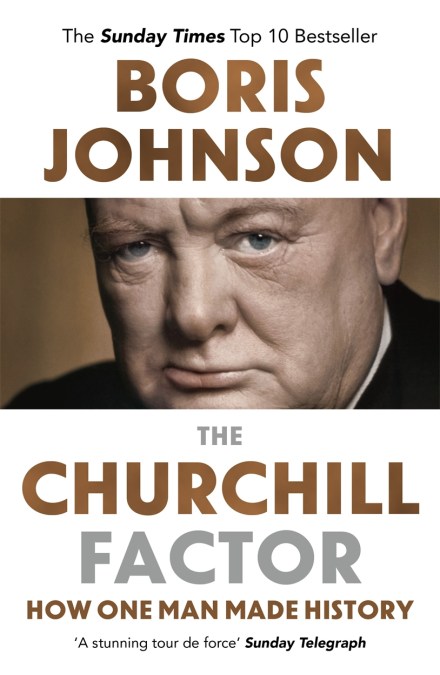 by Boris Johnson
As the country navigates a national crisis once again, read how Britain’s Prime Minister was inspired by Winston Churchill.

One man can make all the difference.

Now leader of the UK himself, Boris Johnson explores what makes up the ‘Churchill Factor’ – the singular brilliance of one of the most important leaders of the twentieth century. Taking on the myths and misconceptions along with the outsized reality, he portrays – with characteristic wit and passion – a man of multiple contradictions, contagious bravery, breath-taking eloquence, matchless strategizing and deep humanity.

Fearless on the battlefield, Churchill had to be ordered by the King to stay out of action on D-Day; he embraced large-scale strategic bombing, yet hated the destruction of war and scorned politicians who had not experienced its horrors. He was a celebrated journalist, a great orator and won the Nobel Prize for Literature. He was famous for his ability to combine wining and dining with many late nights of crucial wartime decision-making. His open-mindedness made him a pioneer in healthcare, education and social welfare, though he remained incorrigibly politically incorrect.

As Prime Minister Boris Johnson says, ‘Churchill is the resounding human rebuttal to all who think history is the story of vast and impersonal economic forces’.

Published in association with Churchill Heritage, The Churchill Factor is essential reading for anyone who wants to know what makes a great leader in a time of crisis. 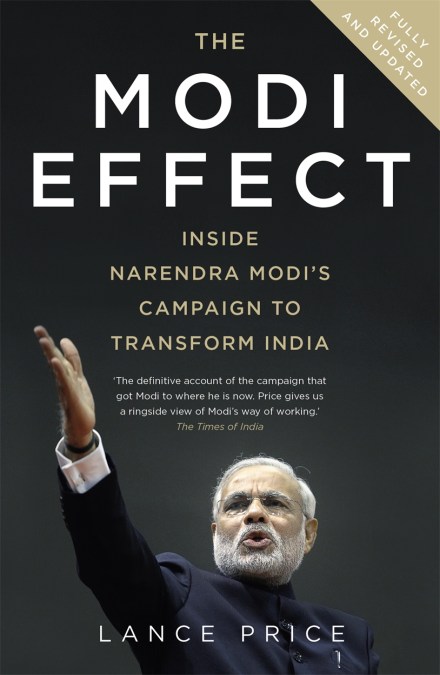 by Lance Price
How did a ‘chai wallah’ who sold tea on trains as a boy become Prime Minister of India?

On May 16, 2014, Narendra Modi was declared the winner of the largest election ever conducted anywhere in the world, having fought a campaign unlike any before.

Political parties in Britain, Australia and North America pride themselves on the sophistication of their election strategies, but Modi’s campaign was a master-class in modern electioneering. His team created an election machine that broke new ground in the use of social media, the Internet, mobile phones and digital technologies. Modi took part in thousands of public events, but in such a vast country it was impossible to visit every town and village. The solution? A ‘virtual Modi’ – a life-size 3D hologram – beamed to parts he could not reach in person. These pioneering techniques brought millions of young people to the ballot box – the holy grail of election strategists everywhere – as Modi trounced the governing Congress Party led by the Gandhi dynasty.

Former BBC correspondent and Downing Street communications expert Lance Price has been granted exclusive access to Prime Minister Narendra Modi and his team of advisers. With complete freedom to tell it as he finds it, he details Modi’s rise to power, the extraordinary election victory and its aftermath. The Modi Effect: Inside Narendra Modi’s campaign to transform India lifts the lid on a whole new box of tricks, where message-management and IT wizardry combined to create a vote-winning colossus of awesome potency. 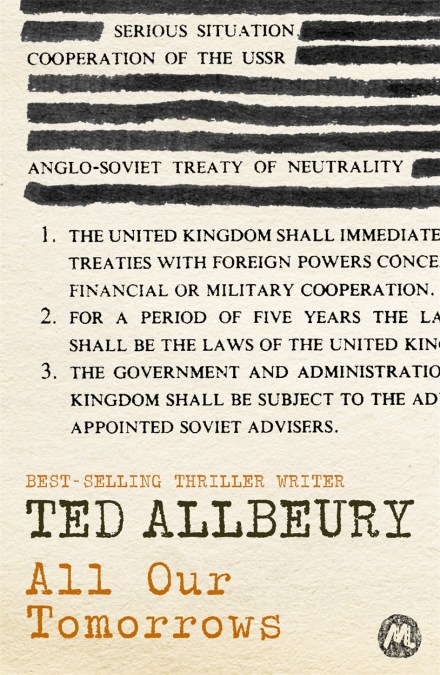 by Ted Allbeury
The year is 1982. As politicians bicker, a neutral Britain’s decline accelerates into anarchy. The Prime Minister accepts the Russian offer to ‘help restore law and order’. Faced with a national breakdown he has no choice.

Millions collaborate. But as Soviet troops take over Britain’s streets, men like Harry Andrews and Jamie Boyle go underground. For them there is only one answer to the life-and-death question: Is freedom worth fighting for?

A nation demoralised, a way of life obliterated: they said it could never happen…but there are flashes of resistance from a freedom loving few… 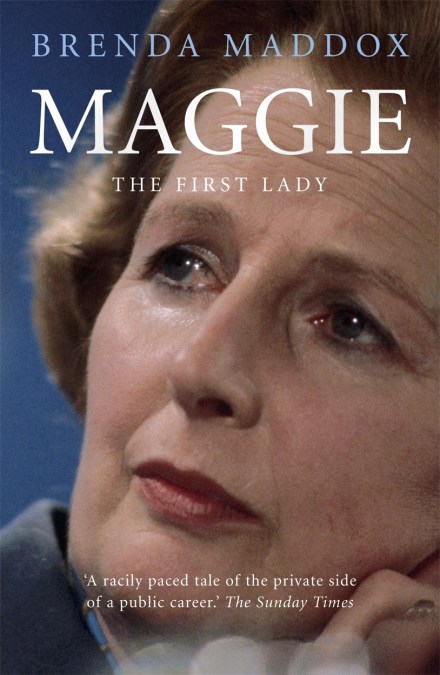 by Brenda Maddox
Who was Margaret Thatcher? Her influence on politics is well documented – not least by Lady Thatcher herself. What no one has attempted before this book by award-winning biographer Brenda Maddox, is to present the personal story of the woman who has been described as ‘the most significant Englishwoman since Elizabeth I’.

Brenda Maddox traces the life of the grocer’s daughter from Grantham who became the most successful Conservative Prime Minister of the twentieth century. Unprecedented access to people who knew her throughout her life, (some who have never spoken before) enables the author to paint a fully rounded portrait of a woman who – even after her death – is still both vilified and adored.

Through the eyes of her contemporaries we begin to understand this extraordinary woman, whose shadow still falls accross British life. 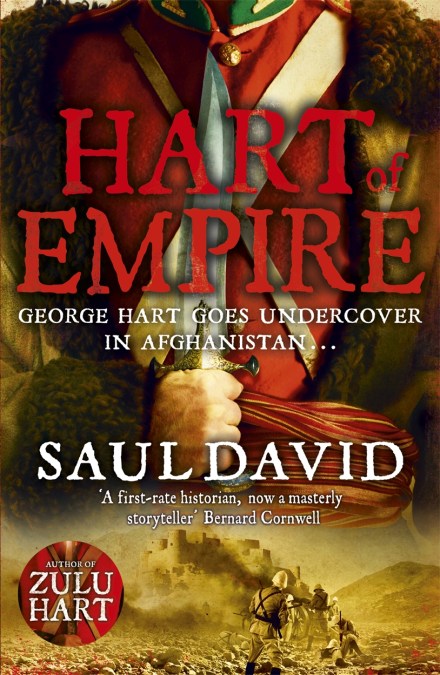 by Saul David by Saul David Ltd
George Hart, back in England following his heroics in the Zulu Wars, scarcely has time to gamble away his meagre fortune when he is summoned to a secret meeting in Whitehall. There, Prime Minister Disraeli himself asks George to undertake a dangerous mission to Afghanistan. Mistrust and dislike for the local ruler chosen by the British is growing and Muslim extremists threaten to overthrow the local government. The British cannot allow the loss of Afghanistan, which would put at risk India, the jewel in the Imperial crown. Although he suspects that the Establishment sees a part-Zulu officer as expendable, George can see that his dark skin will help him go undercover, and soon, accompanied only by a Pathan guide, he is descending the Khyber pass into a strange and violent land. On the way he meets Yasmin, an alluring Afghan princess, and together this unlikely trio find themselves in a race against time to prevent a tribal uprising and head off a catastrophic British invasion. 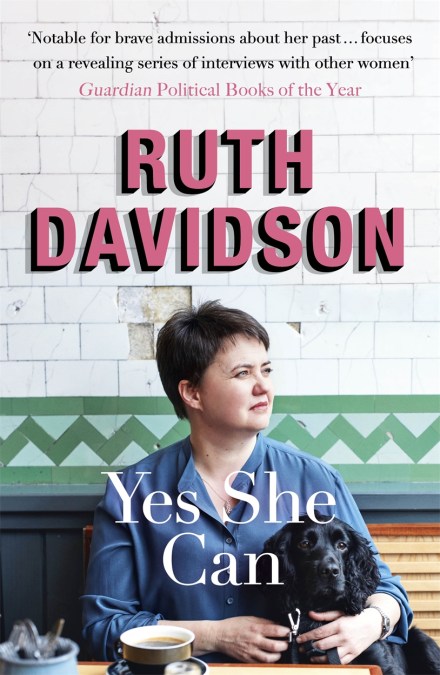 ‘A positive and fascinating read’ Stylist

The woman who trains Indian special forces in armed and unarmed combat, the IMF Chair, the UK’s most capped footballer, a dotcom millionaire, the BBC’s first female political editor, a member of the Royal Household, an eminent forensic scientist, an Olympic gold-medallist, a prime minister… this book is for every daughter, every mother, every aunt and every niece, as eighteen of the world’s mould-breaking women share the life lessons they’ve learned. Every single one of them has shown that yes, she can.

Revealing, enthralling, informing, in Yes She Can Ruth Davidson weaves her own inspiring journey with these personal stories into a timely rallying call for generations to come. 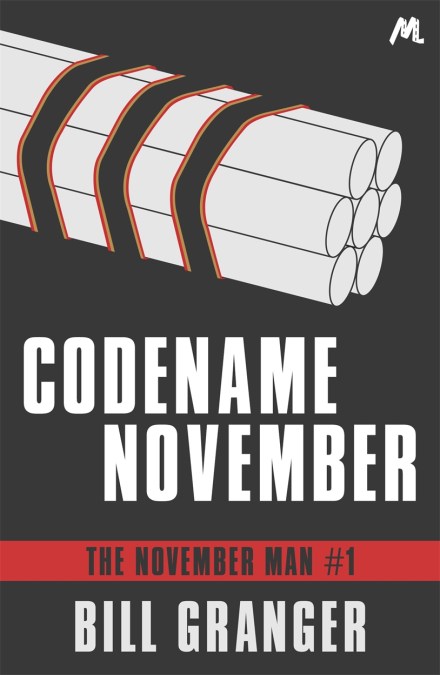 by Bill Granger
WARNING: ADDICTIVE READING.
WE WILL NOT BE HELD RESPONSIBLE FOR LOSS OF TIME, DRY EYES OR DISCONNECTION WITH REALITY FOLLOWING PROLONGED READING.

START READING THE NOVEMBER MAN SERIES NOW! Then go on to read the rest, you won’t regret it.

Devereaux. Codename November. A brilliant, lethally cool operative, he was years ago regarded as one of America’s most valuable security assets.

Now courted by the KGB and under threat from the CIA, Devereaux must foil the planned assassination of England’s richest man and it’s prime minister in a treacherous war of shadows on the Irish Sea.

Devereaux is both target and triggerman, pawn and master player. He is the spy who can never come in from the cold … 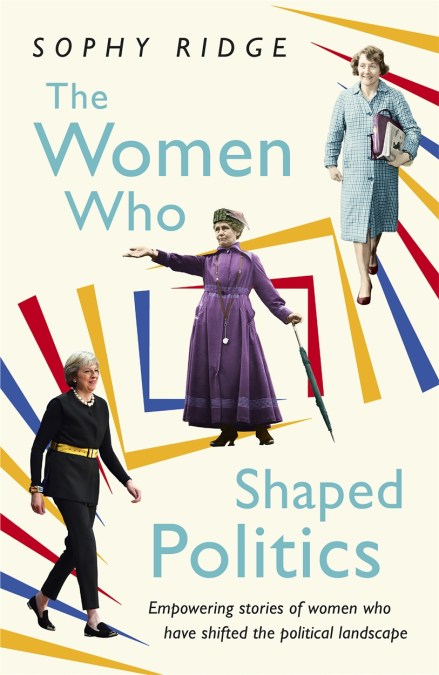 The Women Who Shaped Politics

by Sophy Ridge
Sophy Ridge, presenter for Sky News, has uncovered the extraordinary stories of the women who have shaped British politics.

Never has the role of women in the political world ever been more on the news agenda, and Sophy has interviewed current and former politicians including among others, Nicola Sturgeon, Ruth Davidson, Betty Boothroyd gain exclusive insight into the role women play in politics at the highest level. The book also includes Theresa May’s first at-length interview about her journey to becoming Prime Minister.

These interviews have revealed the shocking truth about the sexism that is rife among the House of Commons both in the past and today, with sometimes shocking, and sometimes amusing anecdotes revealing how women in Westminster have worked to counter the gender bias.

Sophy provides gripping insight into historical and contemporary stories which will fascinate not just those interested in politics but those who want to know more about women’s vital role in democracy.

From royalty to writers and from class warriors to suffragettes, Sophy tells the story of those who put their lives on the line for equal rights, and those who were the first to set foot inside the chambers of power, bringing together stories that you may think you know, and stories that have recently been discovered to reveal the truth about what it is to be a woman in Westminster.
This book is a celebration of the differing ways that women have shaped the political landscape. The book also, importantly, sheds light on the challenges faced by women in government today, telling us the ways that women working in politics battle the sexism that confront them on a daily basis.