A deliciously deadly gothic romance. Full of poisonous deeds, spectacular secrets, and dark mysteries. Belladonna is a hauntingly atmospheric read, with an absolutely fantastic ending that will leave readers begging for more
Stephanie Garber, #1 New York Times bestselling author of Once Upon A Broken Heart
Adalyn Grace spins a gothic tale immersing the reader in a world of secrets, curses, mystery, romance, and Death! She takes us on a journey with Signa that has you sighing from rich details, gasping from exciting twists and turns, and swooning from romance. This book is a true pleasure to read from beginning to end...and it all begins 'with the cry of a baby'
Jennifer L. Armentrout, New York Times Bestseller of From Blood & Ash
Decadently atmospheric. This gothic romance is filled with desire, betrayal, and of course, Death
Kerri Maniscalco, New York Times bestselling author of Kingdom of the Wicked
Belladonna effortlessly weaves mystery, magic, and romance together into a gothic-infused masterpiece sure to become YA's new obsession. Every page drips with atmosphere and will leave readers wishing that they, too, could roam the halls of haunted Thorn Grove. Utterly original and completely addictive, Belladonna is a fantasy to die for
Rachel Griffin, New York Times bestselling author of The Nature of Witches
In Belladonna, Adalyn Grace has crafted a darkly romantic tale that will sweep readers away. This decadent world and forbidden love story are a perfect, addicting escape
Adrienne Young, New York Times bestselling author of Fable
A darkly gothic tale that is equal parts sensuous and sinister, Belladonna breathes new life into YA paranormal romance. Readers are sure to want more of Signa's tantalising dance with Death
Astrid Scholte, author of Four Dead Queens
Darkly twisted and deliciously gothic, Belladonna is the kind of wicked fairytale I've loved for most of my life. Grace's world is vivid and sexy. The romance and the relationships are pitch perfect, and I fully expect readers to fall headfirst into Signa's morally complex world, just as I did
Renée Ahdieh, New York Times bestselling author of The Beautiful
Delicious and haunting, Belladonna is the type of story that sinks its teeth into your soul. With addictive, atmospheric prose and an absolutely spellbinding mix of mystery and romance, this is YA fantasy at its finest. It's dark, it's sexy. I cannot recommend it highly enough
Jessica Olson, author of A Forgery of Roses
A deliciously dark, magical tale. With heaps of murder, mystery and romance, what's not to love?!
Sangu Mandanna, author of The Very Secret Society of Irregular Witches 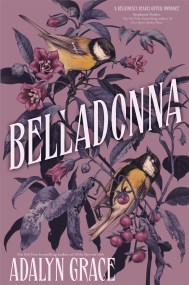