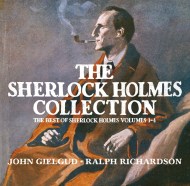 These classic radio dramatisations of Sir Arthur Conan Doyle's world famous sleuth have never been bettered. Ralph Richardson and John Gielgud are matchless as the…